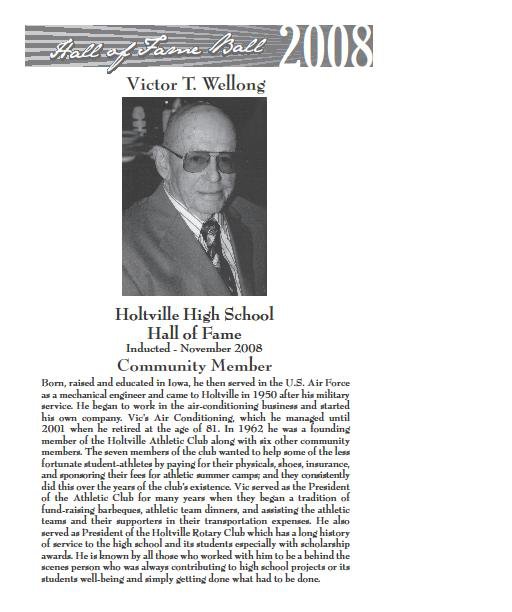 Born, raised and educated in Iowa, he then served in the U.S. Air Force as a mechanical engineer and came to Holtville in 1950 after his military service. He began to work in the air-conditioning business and started his own company. Vic’s Air Conditioning, which he managed until 2001 when he retired at the age of 81. In 1962 he was a founding member of the Holtville Athletic Club along with six other community members. The seven members of the club wanted to help some of the less fortunate student-athletes by paying for their physicals, shoes, insurance, and sponsoring their fees for athletic summer camps; and they consistently did this over the years of the club’s existence. Vic served as the President of the Athletic Club for many years when they began a tradition of fund-raising barbeques, athletic team dinners, and assisting the athletic teams and their supporters in their transportation expenses. He also served as President of the Holtville Rotary Club which has a long history of service to the high school and its students especially with scholarship awards. He is known by all those who worked with him to be a behind the scenes person who was always contributing to high school projects or its students well-being and simply getting done what had to be done. 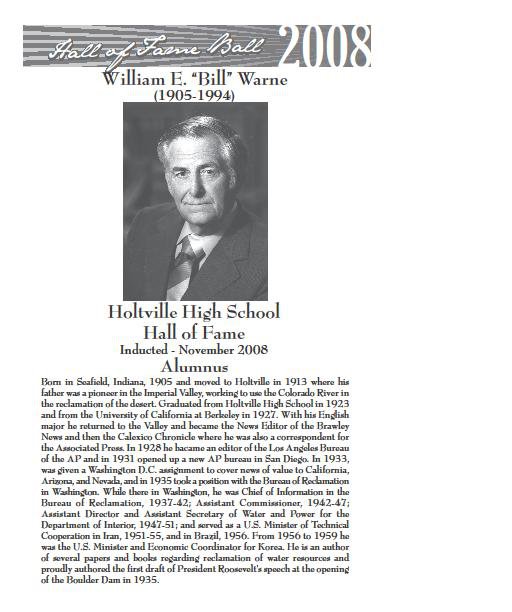 Born in Seafield, Indiana, 1905 and moved to Holtville in 1913 where his father was a pioneer in the Imperial Valley, working to use the Colorado River in the reclamation of the desert. Graduated from Holtville High School in 1923 and from the University of California at Berkeley in 1927. With his English major he returned to the Valley and became the News Editor of the Brawley News and then the Calexico Chronicle where he was also a correspondent for the Associated Press. In 1928 he bacame an editor of the Los Angeles Bureau of the AP and in 1931 opened up a new AP bureau in San Diego. In 1933, was given a Washington D.C. assignment to cover news of value to California, Arizona, and Nevada, and in 1935 took a position with the Bureau of Reclamation in Washington. While there in Washington, he was Chief of Information in the Bureau of Reclamation, 1937-42; Assistant Commissioner, 1942-47; Assistant Director and Assistant Secretary of Water and Power for the Department of Interior, 1947-51; and served as a U.S. Minister of Technical Cooperation in Iran, 1951-55, and in Brazil, 1956. From 1956 to 1959 he was the U.S. Minister and Economic Coordinator for Korea. He is an author of several papers and books regarding reclamation of water resources and proudly authored the first draft of President Roosevelt’s speech at the opening of the Boulder Dam in 1935. 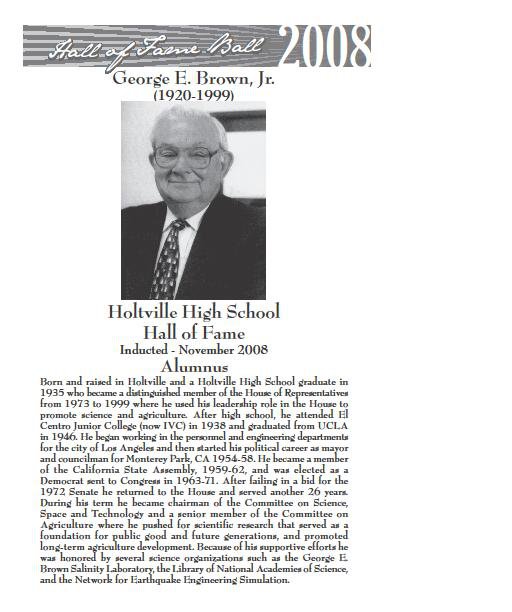 Born and raised in Holtville and a Holtville High School graduate in 1935 who became a distinguished member of the House of Representatives from 1973 to 1999 where he used his leadership role in the House to promote science and agriculture. After high school, he attended El Centro Junior College (now IVC) in 1938 and graduated from UCLA in 1946. He began working in the personnel and engineering departments for the city of Los Angeles and then started his political career as mayor and councilman for Monterey Park, CA 1954-58. He became a member of the California State Assembly, 1959-62, and was elected as a Democrat sent to Congress in 1963-71. After failing in a bid for the 1972 Senate he returned to the House and served another 26 years. During his term he became chairman of the Committee on Science, Space and Technology and a senior member of the Committee on Agriculture where he pushed for scientific research that served as a foundation for public good and future generations, and promoted long-term agriculture development. Because of his supportive efforts he was honored by several science organizations such as the George E. Brown Salinity Laboratory, the Library of National Academies of Science, and the Network for Earthquake Engineering  Simulation. 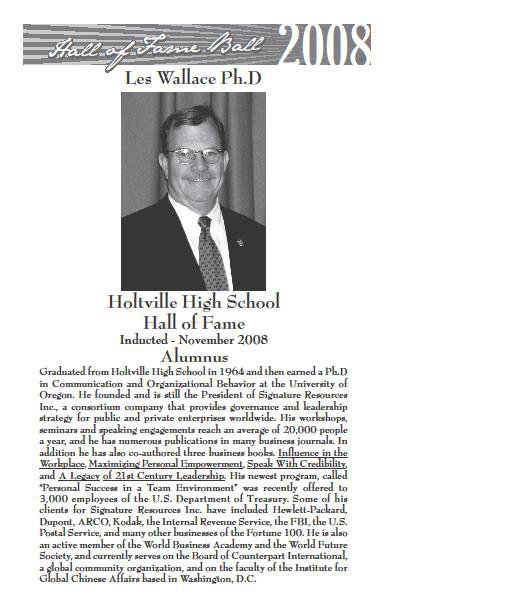 Graduated from Holtville High School in 1964 and then earned a Ph.D in Communication and Organizational Behavior at the University of Oregon. He founded and is still the President of Signature Resources Inc., a consortium company that provides governance and leadership strategy for public and private enterprises worldwide. His workshops, seminars and speaking engagements reach an average of 20,000 people a year, and he has numerous publications in many business journals. In addition he has also co-authored three business books. Influence in the Workplace, Maximizing Personal Empowerment, Speak With Credibility, and A Legacy of 21st Century Leadership. His newest program, called “Personal Success in a Team Environment” was recently offered to 3,000 employees of the U.S. Department of Treasury. Some of his clients for Signature Resources Inc. have included Hewlett-Packard, Dupont, ARCO, Kodak, the Internal Revenue Service, the FBI, the U.S. Postal Service, and many other businesses of the Fortune 100. He is also an active member of the World Business Academy and the World Future Society, and currently serves on the Board of Counterpart International, a global community organization, and on the faculty of the Institute for Global Chinese Affairs based in Washington, D.C. 1985 Graduate of Holtville High School where he was a member of CSF and a three sport athlete in football, basketball and baseball. He was team member of two CIF championship teams in baseball, 1984, and football, 1985. Went on to earn a B.S. degree in Physiology at the University of California at Davis, 1990, and a Doctorate of Medicine at the University of Iowa, 1996. He was a Chief Resident and General Surgery Resident at the Mount Sinai School of Medicine in New York, 2001, and received a Vascular Surgery Fellowship for the Boston University Medical Center in 2003. From 2003 to 2006 he was a volunteer clinical instructor at the College of Medicine at Champaign and the Carle Clinic Association both in Illinois. He is currently a vascular surgeon with the Vascular Center & Vein Clinic of Southern Indiana, LLC in Bloomington, Indiana, and does vasculary surgery for the Bloomington Hospital, Monroe Hospital, Schneck Memorial Hospital, and the Morgan Hospital & Medical Center, all in Indiana. In addition he serves as a Volunteer Clinical Instructor at Indiana University.
Among his co-authored publications for various medical journals are topics on generic drugs, high blood pressure, and vascular surgery. 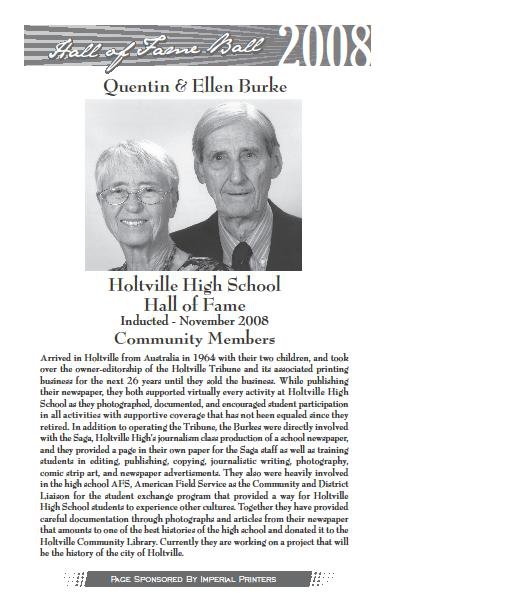 Arrived in Holtville from Australia in 1964 with their two children, and took over the owner-editorship of the Holtville Tribune and its associated printing business for the next 26 years until they sold the business. While publishing their newspaper, they both supported virtually every activity at Holtville High School as they photographed, documented, and encouraged student participation in all activities with supportive coverage that has not been equaled since they retired. In addition to operating the Tribune, the Burkes were directly involved with the Saga, Holtville High’s journalism class production of a school newspaper, and they provided a page in their own paper for the Saga staff as well as training students in editing, publishing, copying, journalistic writing, photography, comic strip art, and newspaper advertisments. They also were heavily involved in the high school AFS, American Field Service as the Community and District Liaison for the student exchange program that provided a way for Holtville High School students to experience other cultures. Together they have provided careful documentation through photographs and articles from their newspaper that amounts to one of the best histories of the high school and donated it to the Holtville Community Library. Currently they are working on a project that will be the history of the city of Holtville. 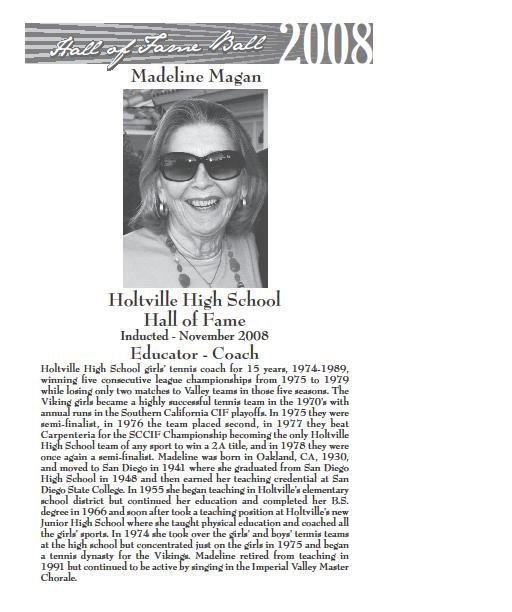 Holtville High School girls’ tennis coach for 15 years, 1974-1989, winning five consecutive league championships from 1975 to 1979 while losing only two matches to Valley teams in those five seasons. The Viking girls became a highly successful tennis team in the 1970’s with annual runs in the Southern California CIF playoffs. In 1975 they were semi-finalist, in 1976 the team placed second, in 1977 they beat Carpenteria for the SCCIF Championship becoming the only Holtville High School team of any sport to win a 2A title, and in 1978 they were once again a semi-finalist. Madeline was born in Oakland, CA, 1930, and moved to San Diego in 1941 where she graduated from San Diego High School in 1948 and then earned her teaching credential at San Diego State College. In 1955 she began teaching in Holtville’s elementary school district but continued her education and completed her B.S. degree in 1966 and soon after took a teaching position at Holtville’s new Junior High School where she taught physical education and coached all the girls’ sports. In 1974 she took over the girls’ and boys’ tennis teams at the high school but concentrated just on the girls in 1975 and began a tennis dynasty for the Vikings. Madeline retired from teaching in 1991 but continued to be active by singing in the Imperial Valley Master Chorale. 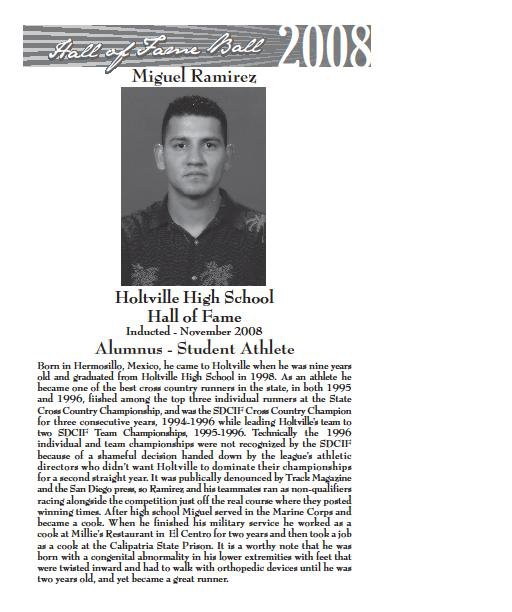 Born in Hermosillo, Mexico, he came to Holtville when he was nine years old and graduated from Holtville High School in 1998. As an athlete he became one of the best cross country runners in the state, in both 1995 and 1996, fiished among the top three individual runners at the State Cross Country Championship, and was the SDCIF Cross Country Champion for three consecutive years, 1994-1996 while leading Holtville’s team to two SDCIF Team Championships, 1995-1996. Technically the 1996 individual and team championships were not recognized by the SDCIF because of a shameful decision handed down by the league’s athletic directors who didn’t want Holtville to dominate their championships for a second straight year. It was publically denounced by Track Magazine and the San Diego press, so Ramirez and his teammates ran as non-qualifiers racing alongside the competition just off the real course where they posted winning times. After high school Miguel served in the Marine Corps and became a cook. When he finished his military service he worked as a cook at Millie’s Restaurant in El Centro for two years and then took a job as a cook at the Calipatria State Prison. It is a worthy note that he was born with a congenital abnormality in his lower extremities with feet that were twisted inward and had to walk with orthopedic devices until he was two years old, and yet became a great runner.